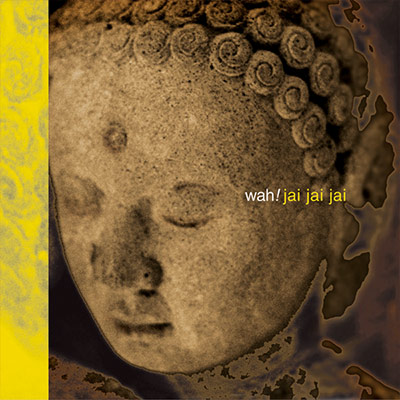 The Story Behind Jai Jai Jai

The problem was, we kept playing new chants while we were on tour. And the longer we stayed on tour, the more new chants got composed. This album was created to offer a CD of songs many audiences already knew and loved.

The original tracks were recorded in December 2002. A beautiful window of silence was created while everyone was away on Christmas holiday, and it allowed me some creative, quiet space in the studio. “Durge” and “Shree Krishna” were readily available; we had been playing them every night on tour. “What She Has to Give” was a lovesong rejected from the Opium CD, but we performed it often. “Bolo Ram” was a collection of chants we had been doing in a million different ways. And then there were the special gifts, “Shyam Bolo Jai” and “Gayatri” which came to me directly from the silence of the moment. “Om Mani Padme Hum” was resurrected to give us 67 minutes total.

I brought in David Leach (Ben Harper’s drummer) and Girish Gambhira (“Hidden in the Name” and “CD Krishna”) to handle the percussion. We recorded the choir in January, bringing in singers from Los Angeles, Palm Springs, Topanga Canyon, San Fransisco and even Tucson, Arizona! (hi Rachel, hi Bronwin) By the end of the sessions we were all completely stoned. The chants lingered in our hearts for many days afterwards. Lunch was catered by Ann Leonard (Royal Soy (310) 937-8737), ginger tea offered by Bhavani Shankar, and the altar was overflowing with fruit, flowers, and pictures of teachers, saints and guides.

Paul Hollman agreed to do the editing and session recording needed to finish the tracks. It took six months and three computers to finish editing. Need I describe the setbacks? Faulty hard drives, fatal computer crashes, information lost in defragging, lost session files (audio files won’t play without their accompanying session files)… How about this one…. George Shelby, the sax & flute player, was on his way to the studio when his car broke down. AAA came and was fixing his car, when the radiator cap blew and sprayed George’s arm with steam. George was not injured but a policeman was driving by just at that moment and witnessed the accident. Because he had witnessed a “potentially hazardous injury” he was required to call an ambulance for George. The ambulance whisked George away (without his cellphone), where he waited 5 hours in the ER, so a doctor could say, “Yeah, you’re fine. No problem” (this was obvious). When George got his cellphone back, he called the studio (where we had been waiting for him for 6 hours) and said he would prefer to come another day… It really is impossible to say what the karmic reasons are behind these events. On tour or in the studio, we come together to process our karmas. George Shelby, Kirk Margo, Katisse Buckingham and Paul Hollman offered beautiful and masterful tracks on the album.

I had to go on tour for the summer, so mixing was scheduled for August in Knoxville, TN with seva. Seva mixed in Pro Tools using a combination of analog (Manley compressors and EQ, et al) and digital gear (Waves Renaissance and more) to create beautiful 3-D mixes. He also mixed several songs in surround sound. Salomon worked his magic on the graphics, and Jai Jai Jai was ready.

“Jai” is a word I frequently talked about while I was on tour in 2002-2003. “Jai” is often translated into archaic texts as “victory” or “hail.” The British-English translations fall short of conveying spiritual impact. “Jai,” “Jaya,” even the word “wah,”… these are all expressions of speechlessness. When you cannot say anything, when the vastness of the Universe is acknowledged and bowed to, when your heart opens, when your life falls apart, when you win a million dollars, when you turn on the TV and see disaster… all you can say is “wow….” This is “Jai.” This is the opening.

Jai Jai Jai – one opening for each realm: mortal, immortal, and divine. Jai ! ~ heaven, earth, and beyond. May all beings find happiness and peace.