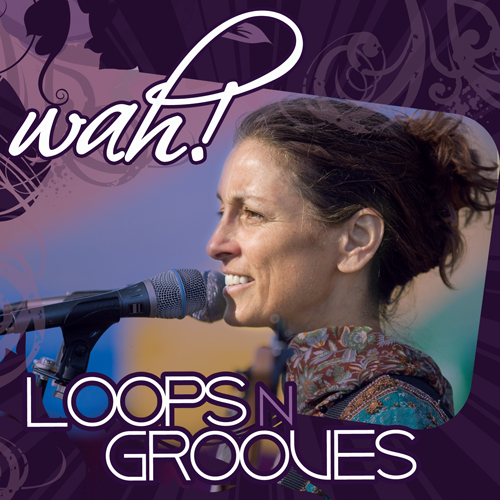 “The vocals are gentle and simple, the rhythms clean, and the accompaniment
precise… the effect is a consistent and calming musicality.”
YOGA INTERNATIONAL

The Story Behind Loops N Grooves

Mike Haziza joined the band in 2009 and started developing unique ways of laying down beats using beatbox, cymbal and a loop station to create great grooves at the live shows. I had my own pedals, delays and loops which I enjoyed using. As we continued exploring new sounds and loop possibilities, it seemed like the right thing to bring the ideas into the recording studio…

I also felt compelled to record the kind of music which was working for me personally. After 2 years of healing from a near-death, I thought a savasana album would be appropriate. We recorded some meditative tracks and they were beautiful, but I never used or listened to them. I’d put the savasana tracks on and then quickly become distracted and turn to something else. It wasn’t just me. The world was speeding up, people were more computer enslaved, attention deficit was increasing. Most people expected text and email to be returned within the same day; facebook, twitter, and online networking were in full force. People changed channels and radio stations in milliseconds. Music for video games was the highest paying form of music in the market. Yes, I played savasana music live and it had coherence in the moment, but whenever I played savasana music as a CD track, the energy was flat. I moved into the world of loops, beatboxing and delay.

My life was chaotic at this time, I had no real home or base from which to function. I used music to heal myself and create coherent energy for myself and others. In concerts and on tour, I was asked to perform in hotels, conference centers, gymnasiums – places which had no sacred activity inherent in them – but within which I had to create sacred energy quickly. I continued studying puja, mantra and thought technology and used what I learned to sanctify each space and create coherent energy for the concerts. I studied architecture, I watched how the spaces responded to energy and to the music. I watched the audiences, I noticed how they responded to the music and my dharma talks, how and when they settled into peaceful energy. I noticed that music with a beat was more helpful, especially when dealing with agitation and disorganization, and music without a beat could only happen later on in the concert when people were comfortable and settled in the sacred energy. If I played sweet dreamy music without establishing a strong sacred energy structure, people would get up and leave, squirm in their seats, or have trouble moving into meditation. Beats, beatboxing, and mantra became my tools for creating sacred space quickly in a space where there was none.

Haziza started this project by recording three tracks – Gananatha, Shiva and Om Shakti – and our work on these plus Free Ram (taken from leftover tracks never used on the last Maa album) were the foundation for this album. The other songs either adhered to this format or were thrown off the project.

Paul and I worked differently in the studio, avoiding visual decisions and cut-and-paste routines so easy to succumb to on the computer. Instead of arranging blocks of music by cutting and pasting information, we kept many of the live takes in tact and arranged around the live energy. Instruments that were looped were treated as Ableton Live projects – we arranged all loops into infinite play and then used mute buttons to “play” or select the tracks live. Paul and I didn’t clean things up too much, I wanted to avoid the monotonous feel of computer-generated, quantized, looped music. The effect of quantized music on people was numbing – I saw people (and myself) tune it out as soon as it came through the speakers, it became background music. I wanted my music to heal and transform people. How to do that in a computerized world? I couldn’t deny the computer, it was there, clearly, in my life as a permanent fixture. Even in our live shows we looped and used computer chips in our equipment. I didn’t want to reject the computer but I also didn’t want to be enslaved to it, a phenomenon I was seeing more of as the months and years went by. I chose a middle ground of cooperation, using elements of live performance and sacred energy with computerized loops, software, and loop stations. In the middle of the project, I succumbed to exhaustion. Ear fatigue, life fatigue, and loss of purpose caused me to shut down my work and this project. I went to Europe, I walked, I spent time in nature. I cried, I rested, I healed. After 6 months off, I came back to the project renewed and ready to complete its birth. I added a rap to Free Ram which suggested a new way of living – leaving enough energetic space in your life to let the Universe participate (hold with light and lightly hold that which you wish to create, let the Universe participate and make it great). I could no longer push things into existence, the frenetic pace of the world was too disjointed, too distracted, to will things into existence. The Universe had to offer its own beautiful energy to the mix, or the project wasn’t going to happen. I re-entered the studio with a dedication to bring forth its beauty and original enthusiasm. Paul and I mixed, Seva mastered. We brought our talents, expertise, experience and dedication to this project. Many thanks to all those who held me while I healed, to those whose homes I stayed in, to those who came to the concerts, to those who prayed and held me in light. Love did triumph in the end, I found a new way of being, relocated my life, and began again. This project was the process of rebooting (musically and physically) – using beats, rhythm and energetic structure to hold the new energy.

LOOPS N GROOVES comes to you after 2 1/2 years of recording, experimentation and editing. It is infused with devotion, transformed by the technology of computers, and blessed by meditation and prayer. Thank you for supporting my music!