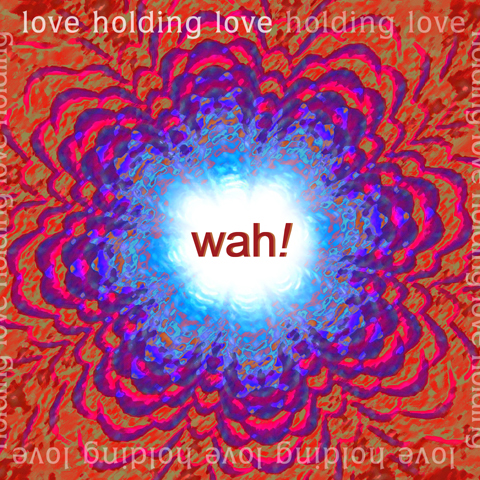 “The album contains some of the catchiest tunes in Wah!’s vast catalog”
YOGA JOURNAL

The Story Behind Love Holding Love

Paul Hollman and I had worked together for six years, creating WAH! Savasana CDs, Jai Jai Jai, English songs for the Amma benefit CD (Embrace), performing and touring together. But we had never really collaborated or written any music together. Paul composed music for commercials and film. I wrote lyrics and books, and magazine articles. We wanted something that would deepen our creative experience together

I began the collaboration by asking him for music. “You got any old tracks?” He gave me a track called Interstitial and I wrote lyrics for it on the long drive from LA to San Fransisco. Paul loved it; this track became The Way You Love Me. More tracks of unfinished music came to me, resulting in Unconditional, Home, and Brazil.

Other songs were born directly from lyrics. Girl in the Video was written after seeing myself on video for the first time. Paul and I were watching a recent concert and I exclaimed, “She has such sad eyes…” The lyrics became my view of myself through the camera lens.

Sacred Patterns came from conversations I had with scientist and laser specialist, Randy Johnson. His conversion from warfare to peacetime use of science was responsible for our connection. We discussed the similarities of light and sound and how they functioned in the subatomic world of quantum physics. His theory that love was a reproduceable formula and documentable in nature, was intriguing to me. Our conversations inspired the lyrics to this song.

Paul wasn’t always able to come on tour. His work in film and TV often kept him in Los Angeles while I travelled with the band. He worked on our music while I toured. His recreations of our experiences with the live band were the basis for tracks like Radhe Bhaj Soulshine and Ma Chant. The trippy nature of the chill/lounge music I liked so much inspired Maha Deva, Ganesha and Hanuman.

Heart Sutra was an experiment. We originally thought this would be a remix CD. When it turned out that every single original vocal track had harmonium bleed, we started again from scratch. Heart Sutra was an imitation of the original. We put it away for a year and forgot we even had it til we found it one day by mistake. The Dead-Can-Dance-style vocal improvisations at the end were a surprising treat; we didn’t remember recording them.

Spoken word on this CD was my creative solution for concert lectures that seemed too long. I often talked to the audience, discussing issues of meditation and spiritual life, but I felt the need to move beyond long discussions. I began speaking in rhyme, speaking freely over bass and drum grooves. I wanted to explore sharing ideas and thoughts with the audience in a way which was trendier and musically integrated so it could be performed at music festivals and venues which were not conducive to reflective discussion. What resulted was a rhythmic spiritual poetry slam. Some people liked it, others didn’t. but it satisfied my need to talk in poetry.

Paul and I added tracks and ideas, edited and reflected together. Paul created drum tracks and synth parts, hooks and fillers. He played Rhodes as only he can do, composed string sections and percussion tracks. I think a year or two went by like that – recording, editing, refining our sound together. Eventually, we brought in outside talent to round off the mix. Elijah Tucker tracked drums on Home, Brazil, Way You Love Me, and Girl in the Video. His drumming was a standard on my tours. It was a blast to have him in the studio. Katisse Buckingham put his cutting edge vocal percussion and jazz talent into the songs. Katisse played silver and alto flute on Randy’s Song and Radhe Bhaj Soulshine. Ryan Pate was brought in by Paul to play drums on Maha Deva Soulshine; he ended up performing live with me on several occasions as a result of his studio work.

Seva mastered the project with his usual expertise and finesse. Seva had one request of me when I met him in the 1980’s: he wanted to master every CD in what he hoped would be a long and fruitful career for me. I have honored his request.

Our working title for the CD was Remixed. We originally thought the whole album would be remixes. Maha Deva was licensed in the US and Australia before we even released the CD. Some songs were licensed for internet use. And for all, we claimed the tracks were from a CD entitled Remixed. But the title was incongruous. New songs greatly outnumbered remixes. The CD was six chants and six love songs; it was a mix of Sanskrit and English brought together by a single desire to explore love and its healing power. I felt that love was beyond category and could be experienced as divine love or personal love, and either form catalyzed healing. To me, love for Krishna was the same as love for another person. Love was Love, straight and simple. I explored this through my lyrics, singing, rapping, teaching and living. The CD was named Love Holding Love – only love could hold love for another. It was only about what you held for yourself – if you held love then you would experience it with others. If you did not hold love in your own innerworld, you would never find it anywhere outside yourself. Love was the answer – a universal energy network for the Self, and an authentic path towards transformative healing.

Love makes it grow; love makes it allright. Love brings you through your long dark night. Love is the way you hold me. Love is the way you breathe complete and magical. Love is something you build; it’s not just theoretical. It’s the way you introduce possibility widening. Sooner or later it’s overflowing … It’s a strong current of love holding love and light making light. Love brings more of the same; love attracts more of what it likes… Making love is a conscious choice… (lyrics from Randy’s Song and Radhe Bhaj Soulshine)

Paul and I lived and breathed this project together for two years; it became a part of our lives and a catalyst for our work together. I hope you enjoy the fruits of our efforts.

About the Album Wah! speaks guided visualizations set to favorite songs and brand new music by Wah! These beautifully...
Read More
About Walk Through That Door Two affirmations for healing, featuring Kirk Margo on electric guitar, harmonium, bass and percussion....
Read More
About Hidden in the Name This 2 CD set gives you 11 chants and 130 minutes of great music....
Read More