All Albums / Queen of Mantra 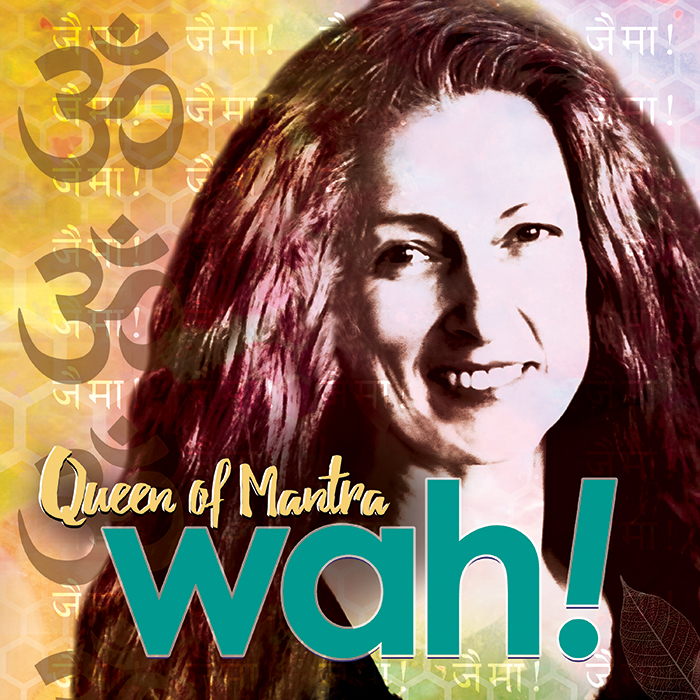 International yoga music star Wah! releases her new CD of mantra music QUEEN OF MANTRA. Her upbeat tracks have inspired yogis for over 20 years and she is credited with being one of the founders of the yoga niche music market. The album has 6 upbeat tracks for yoga workout and 2 tracks for meditation.

The Story Behind Queen of Mantra

Three years ago I started recording some of my favorite mantras for an album. Then I got sidetracked - I had to finish a live album (Live) and a Healing Concert album (Take the Light). I was also right in the middle of writing my Self-Care book and developing the deck of cards. With too many projects waiting for my attention, I stored the recordings for this album so I could work on them when I had time.

When I came back to the project, I was ready to explore new plug-ins, new effects and new software. We added color to the voice by adding a lower octave duplicate and some static to the lead vocal (Ganeshaya). We used hard auto-tune to get a synthesized vocal track (He Ganga). We added delay, pan, megaphone (Calling in the Devis). I wanted to see what effects were out there that could enhance the vocals and surrounding tracks.

Krishna Festival and Triambakam were recorded just like we performed them live and it was fun to bring the band energy into the studio. I also wanted some meditation tracks on the album, so we selected two favorites from my Yoga Teacher Training sessions in San Francisco - Shiva Meditation and Tara Meditation. Singing with the teacher trainees in a quiet yoga studio late Thursday nights in downtown San Francisco is still one of my favorite things to do.

Paul Lyons played keyboards on Ganeshaya and Krishna Festival. He did a beautiful job and I loved his takes. When I asked for a few revisions, it had been so long since he had recorded the tracks, he didn't even have the settings (or that particular keyboard) to return to! I made slight enhancements but left his recordings pretty much untouched. They have a great feel.

Calling on the Devis was my way of recreating an experience of chanting the Chandi Paath, an epic poem about the great goddess Chandi who takes form to vanquish the thoughts Self-Conceit and Self-Deprecation. During this time I was driving up to Shree Maa and Swami Satyananda Saraswati's Devimandir temple in Napa, CA and chanting the 2.5 hour practice with them. Their understanding and fervor for chanting this epic work is unparalleled. When the goddess strikes with her pike, the thunderheads roar. When the goddess chants "Hum!" the negative thought is suffocated and extinguished by the power of her words. When the lion of the goddess chews up the negative thoughts you hear his teeth gnashing, the blood dripping on the earth. It's like an epic comic strip come to life, and the result is tangible. Calm, peace and beauty reign on the earth and in my being after reciting Chandi Paath with Shree Maa and Swamiji. (www.shreemaa.org)

A little background... the battle between goddess Chandi and the thoughts comes about because The Great Ego hears about the beautiful goddess Chandi and decides he wants her as his wife. She has no intention of aligning herself with The Great Ego or his two mighty warriors (Self-Deprecation and Self-Conceit) so she sends a message back to him: "Yes, O Great Ego, all that you have said is true: Self-conceit is the Master of the three worlds, as is equally the valiant Self-Deprecation. However I have taken an oath to which I cannot be untrue. Whoever will defeat me in battle, whoever will lose his self-conceit in me, whoever will see all the force of the universe in me, he will be my husband. If you can defeat me in battle, I am yours." And so the battle begins.

The goddesses multiply, so I multiplied the number of tracks. The Mother of All wages war on the armies of thoughts including Sinful Eyes, Seed of Desire, Agitated Awareness, Wandering To and Fro, Passion, Anger, Confusion and Anxiety. Many goddesses are called in. I called in the goddesses by name. Kali manifests from the body of Chandi and defeats Passion and Anger - I repeat the refrain Jai Jai Ma Devi, Jai Jai Ma Chandi, Jai Jai Ma Kali Jai Ma; Jai Jai Ma Devi, Jai Jai Ma Kali, Jai Jai Ma Chandi Jai Ma. The battle takes place in nature; I added the cry of a falcon. The heavens shake under the ferocity of their battle; I added sub-bass drums. The battle is victorious. Praise the Goddess! We celebrate.

Radhe Groove was a groove the band used to play for soundcheck - just a cool groove with a refrain "Radhe Radhe Radhe." We liked it so much we started performing it as a song in a medley of Radha Krishna tunes.

Tara Meditation is something I wanted to share because of its incredible power. A large painting of Green Tara graces my home so I am able to study her beauty - the way her body and foot rest on luminescent white light (ground luminosity), her throne emanates from the water, the golden disc of light behind her head, the opening in her hands, feet and forehead. Green Tara and her mantra seem integral in healing the Mother Earth - she IS the Earth and elements. Mother Nature can reign in peace with recitation of this mantra and the benefits to your own health and healing are added blessings. The orchestral arrangement was created to communicate the lush, richness of her capacity. Praise Tara!

So much effort has gone into each recording, it's probably too much to mention here, but just let it be known that the musicians, engineers, and my mastering engineer (seva at Soundcurrent Mastering in Knoxville, TN) put their hearts, souls and expertise into this project. What seva did with his mastering saved the project; had he not been able to miraculously remove and cloak the digital audio affects that resulted from our tempo changes, I would not have been able to finish the CD. And a big thanks to Edward Edwards at The Orchard for helping to get the CD recognized by digital streaming platforms.

I look forward to meeting you and connecting. Jai ma,