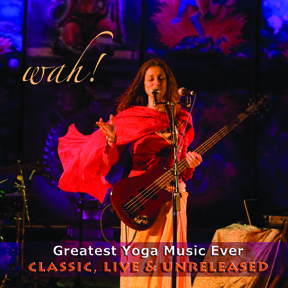 The Greatest Yoga Music Ever – Classic, Live and Unreleased

A DIGITAL DOWNLOAD ALBUM – available through itunes and amazon featuring over 2 1/2 hours of music – truly the greatest yoga music ever – including classic tracks, live concert recording, and an unreleased remix of Shanti. If you think you’ve got all the Wah! tracks, think again. This retrospective of her long career has juicy gems and forgotten favorites. Wah! tunes at your fingertips, for hours of listening pleasure…

“A great mix of soulful slow and up-tempo music. Great for any occasion.”
AMAZON

Wah! was selected as the featured artist on itunes in the World Music category June 28-July 12, 2011. This download album was created in celebration of that recognition.

Combining a unique mix of pop, world music, reggae and mantra with hip production – Wah! has created an Eastern-tinged, groove-oriented style of music that is uniquely her own. Anchored by Wah!’s captivating bass playing, “Greatest Yoga Music Ever – Classic, Live and Unreleased” offers up 25 inspired tracks including classic fan favorites like Come to Me and Love Holding Love among others. In addition, tracks like Shakti Live capture the unbridled spirit of Wah! recorded live and such previously unreleased tracks as Shakti and Shanti (Free Mix 2.0) will delight fans.

“I’ve been trying to weave together elements of pop music within the chanting because pop is the heartbeat of American music – and if it’s got emotion and a groove – I’m there,” says Wah! A celebrated trendsetter in the yoga world, Wah! is a spiritual pioneer, musician and record label founder who has been touring and recording for over a decade and continues to draw attention in the yoga community and beyond. Wah! is distributed and licensed in the U.S., Argentina, Brazil, United Kingdom, Europe and Australia and she is recognized by such media outlets as Yoga Journal, Yoga + Magazine and UK Yoga Magazine among others as a worldwide leader and creative impulse for the yoga community.

The release of “Greatest Yoga Music Ever – Classic, Live & Unreleased” comes amid anticipation of Wah!’s upcoming Fall release, “Loops & Grooves”, which is sure to be her most successful album yet.