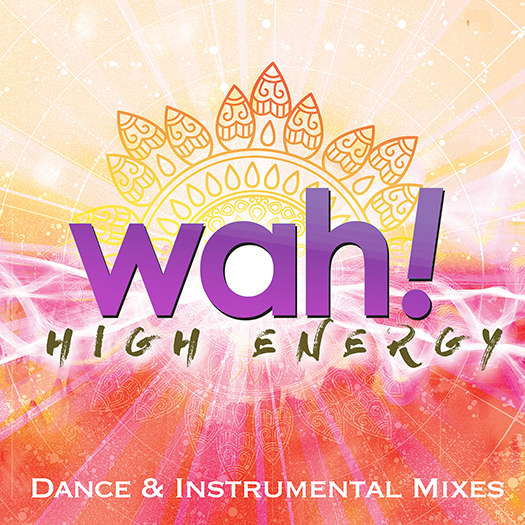 New songs, remixes, upbeat music to celebrate life! Get all the colors of High Energy!
The second CD of High Energy with most songs at 124bpm, with great dance mixes, instrumentals and new songs! Instrumental mixes are great background music for teaching yoga.

The Story Behind High Energy Vol 2

Volume 2 of High Energy marked my foray into Ableton Live. New ways of producing required new pathways of thinking. This music was arranged by pushing buttons rather than playing instruments. I couldn’t wrap my head around it. After years of playing the bass and performing with a band, I had to rewire my brain for a new approach. It was time to try new things, take a risk, and learn some new software.

Creating and editing samples of music was kind of like preparing a jigsaw puzzle that I would arrange in front of an audience. It was mostly visual information. And very easy to overproduce, use too many sounds, overloop harmonies and supporting parts.

How to do this? It may sound strange to you but when I felt resisitance towards the new music equipment, I sidetracked into the kitchen and started making new recipes. I ventured into unknown territory with idly and sambar which required fermentation, spices and cooking methods I was not familiar with.  Every time I made progress in the kitchen, I made progress with drum programming and DJ production.  Failures in the kitchen didn’t bother me nearly as much as failures in the music studio.  It allowed me to explore, experiment, and fail without judgment.  Innocence was required and I was far from innocent; I felt demoralized by Trump politics, corruption, racism, and fragmentation on every level of society.

To begin, I played with ipad programs, listened to dance music, bought a Push2, bought a Launchpad, watched videos to see how people set it up, how they used it.  I studied artists who used loops – Beardyman, Kimbra, Elise Trouw, Jamie Lidel.  Some people created beats, others looped existing beats.  I watched competition shows like Britain’s Got Talent, The Voice, etc. I watched the artists grow working with their coaches, costume designers, live backing bands, teachers and advisors – what they did with their opportunity determined the result.  The artists showed me many desirable qualities – trust in the Universe, ease with their natural skill, diligence and enthusiasm to work at improving their craft, and openness to trying new styles, songs and genres.  I had to trust my new venture – a new world of software, equipment and sounds.  As a record label owner I loved the coaches who had to select good songs, find good artists and put together a top-notch package.

I started with existing multitrack; Green Remix was a new twist on the world peace mantra (Lokaha Samastaha Sukhino Bhavantu) and I loved the “So Shanti” girls!  Yellow Lakshmi Remix, Black Remix started with multitrack but morphed into new material.  For Navaratri celebrations (celebrating Goddesses for 9 days) I added more mantras and new melodies to the song Pahimam. Durga, Lakshmi, and Saraswati were added in this new version which became Yellow Lakshmi Remix. So nice to have the 3 super goddesses together in one song! Black Remix was re-recorded with old and new Shiva mantras.

Sapphire and Emerald were a beautiful surprise. Written in 2012 and left in a drawer, they were hidden gems waiting for a project. At that time I had no time to record my ideas; I was developing the Healing Concert – audio samples, looping methods, lighting, projections and presentation.  Six years later as I put together this album, I knew I had found a home for these orphan songs. New beats, effects, loops and samples came forward. I dumped my loops from ipad softwares into ProTools at the studio, then extracted them as samples for Ableton live performance. Perhaps a long way around the barn, but this was my creative process.

Aquamarine was magical for many reasons, one of them was because I recorded this song during the week I helped my friend James Garfield go through and recover from brain surgery at Stanford Hospital. I was actually in no condition to record that day but I went anyway and spent a few hours in musical prayer. James Garfield has amazing courage and this song commemorates his healing.

Thank you for supporting my work by opening and expanding your life,