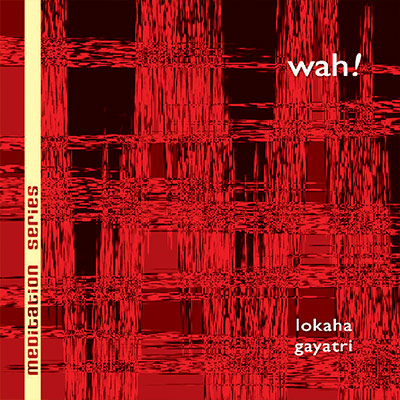 These extended remixes are designed for immersion in healing and meditation. Two different approaches ~ one energetic, and one receptive ~ weave dub, mantra and ambiance together to create an experience of spaciousness. Just enough mantra to keep you present, with loops and effects to send you out…

After the release of Jai Jai Jai, many people wrote in and asked for a longer version of Gayatri for meditation. I sent all my requests to seva, my sound engineer, asking him to whip something up. He wrote back and said, “Yes, I’m working on it. Do you have a bookend for this?” One song just wasn’t enough; it needed a pair to feel complete.

Julie Rader had asked me to bless her new yoga center (Mukti Yoga) with some chanting. It was a festive occasion and I dressed appropriately ~ a neon green metallic kurta with hot pink pajama pants and curly-toe Indian sandals. When we got home from chanting and my landlord was waiting in the driveway, perhaps my garish outfit stunned him into silence, so I said nonchalantly, “How ya doin’? What’d’ya do, sell the place?” He said, “As a matter of fact, yes.”

The Lokaha mantra was played in a spontaneous monotone at the Mukti Yoga blessing, and it was staying in my head. So even though we needed to find a place, pack the boxes, sell the furniture, I felt compelled to go in the studio and record “the bookend.” I dumped percussion tracks from other projects, and mixed and matched grooves. I sang a scratch vocal. As the project progressed, I liked it more and more. And it was really helping me stay in a positive space. I invited a response choir and Katisse to do flute. The vibe was beautiful. We sang and added dub, echoes & effects and finished the track. I moved my boxes into a new house, pinned up some curtains on the windows, and left for Nashville.

Gayatri was pieced together but didn’t have a personality yet. Seva and I created sections and featured different instruments in different sections. Seva had some effect boxes he had created but never sold on the market (many of his products and plug-ins are featured in WAVES). He added them to my voice and the Rhodes to generate what we called “enigmatic” sound pieces. The track was getting pretty spacey.

When I got home, I just felt it was TOO spacey. I was weary of all the voices and the breathy, beautiful nature of the track. Where was the grit? Were we going to float off to Neptune here? I went back in the studio, with no clear idea of what I wanted, spent 15 minutes previewing sounds, and then started recording. It was a brassy kind of sound, grating and majestic. With the pitch blend, it suited me just fine.

Bob Olhsson, our mastering enginner, had a favorite phrase ~ “the music has to hit you in all the chakras at once.” With Gayatri, I felt I finally got it. The voices and strings sang at the heart, the bass and drums hit the foundation chakras, and the brass penetrated my third eye. At one point, I asked seva for a mix that had the brassy synth at a lower volume. For me, it fell flat this way, so we returned to the brass synth blasting away. Ahhh…

We toured New York, and then I went on tour with Krishna Das for 2 weeks, receiving Fed Ex at the hotels and checking the CDs late at night after the concerts. Somehow it all got done.

I am lucky to have been able to work with such great talent ~ Katisse Buckingham on alto flute, has played for everyone from Herbie Hancock to Dr Dre; Robert Fernandez on cajon, has toured with Barry Manilow and other pop greats, and currently directs the Masters program in Afro-Cuban Music at Cal State LA. Bob Olhsson the icon who mastered all the Motown hits in the 70s and 80s and went on to lend his talents to the Hearts of Space label, mastered the tracks with his vast experience in both pop and ambient music, the two areas of music I aspire to. Seva went beyond the call of duty, mixing and remixing til I finally got what I wanted. His attention to detail on the Gayatri Luscious Chill Mix might be noticed by some but is felt by all. (for example, the lead vocal never breathes on the Luscious Chill Mix, it just fades in and out…) Auto-tune was used on the original mix, as an added flavor, but we removed auto-tune for the longer version to give it resonance.