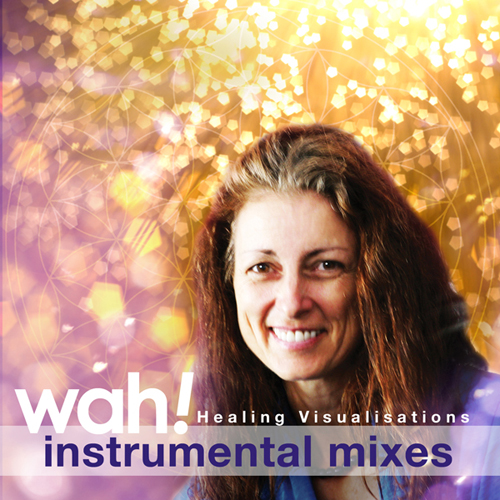 These are the instrumental tracks of Healing Visualisations 2-CD. No spoken word instructions on these tracks, just music. This album will be great for relaxation, spa, massage, healing treatments, sleepless nights, good energy in the home, teaching yoga and practicing meditation. These are original Wah! instrumentals and previously unreleased music. 2-CDs, 150 minutes.

These tracks, both their content and their longer length, are not suitable for streaming. Segmented portions are available through iTunes BeatsMusic, Spotify, Rdio, Rhapsody, Pandora, Slacker, etc. FULL LENGTH TRACK (50 minutes) download available through Wah! Music (includes pdf booklet) for $15. Email wah (wah [at] wahmusic.com) and please indicate if you want mp3 (120MB) or wav (700MB) format. Thank you!

“Healing Visualisations is beautiful on every level, the words, the music and its vibration.”
PEGGY HUDDLESTON, AUTHOR
“PREPARE FOR SURGERY, HEAL FASTER: A GUIDE OF MIND-BODY TECHNIQUES”

The Story Behind Healing Visualizations Instrumentals

The instrumental mixes (available on iTunes download only) were originally something I wanted for my own use, while lecturing or speaking the visualizations without a live instrument to play. But then I found I was in love with the music and enjoyed listening to the tracks without instruction. Maybe others would too…

Not too hard, just take out the speaking track… well it’s not really that easy, as it turns out. An instrumental track exposes all kinds of background noises, samples which haven’t been faded in or out properly, bleed from tracks that were recorded simultaneously with other instruments or melodies and other auditory nuances.

The Healing Visualisations project took over 3 years to make, which sounds reasonable in real time but presents all kinds of problems as it relates to software and studio compatability. I think of computers as being consistent, always giving the information the same way each time. We use terms like “hardware” and “main frame” to indicate stability and strength. But now that software updates automatically, changes formatting and arrangement of files, activates or deactivates previous links or versions, there are all kinds of changes apparent within a file I thought I had stored perfectly. Versions of keyboard samples which expired or were no longer available were replaced by “better” versions, often exactly the thing I didn’t want.

I won’t ramble on about computer crashes, glitches and protools 9 vs protools 10, but I will say that the music industry is now indelibly linked to computers and every musician needs to be a techie to have a career. I spend more time on computers than I do playing scales, performing and playing with other musicians. I seek to remedy this by playing live as much as possible, by putting all my instruments in the living room so they can look at me and beg to be played, and having friends who like to play music. But making or editing a recording puts you back on the computer.

I like writing, playing and recording music. It’s super fun, creative energy. Using my imagination to dream up good music to go with themes from our natural world is exhilarating. Trying out themes, key signatures, and melodies at the Healing Concerts lets me see how audiences will react. Poems, affirmations and spoken words also comes forward in the Healing Concerts and Healing Visualisations project, and I get to see how words, stories and imaginative suggestions affect people. Editing the music and creative ideas is a completely different process, the other side of the brain I am told. It involves detailed computer work, often taking 3 times longer to complete. I had a friend who said making a film is like being born three times: first when you write the script, second when you film it, and the third time when you edit. I believe this is true for music projects as well, especially this one which was long enough to be in a film. These projects either come alive or die on the cutting room floor. You have to know how to edit and arrange it, taking out all the superfluous stuff but not editing out the core heart of the project.

I listen selectively, as do many producers. In the beginning of the project I listen for arrangement (what instruments should be there, do we need anything added or taken away?) to get the emotional response I want. Then I listen for track levels (is the bass too loud? Can I hear the instructions easily, is the music too loud? Too soft?) Then I listen for fade ins, pops, clicks and other strange anomalies. One file (Heart Garden) had 3 seconds of harmony track muted accidentally. Another (Mother Earth) had clicks which I thought was from editing but turned out to be static from a faulty software device (when it activated it created clicks and pops randomly). After seva mastered the track, there were subsequent listens to make sure there were no new clicks, pops or things I hear which I hadn’t heard before. Sometimes a bird will chirp outside and I’ll think it’s on the final mastered track even though I’m inside several insulated enclosed walls. That’s how carefully we listen. And there’s no one like Seva, whose been in the mastering business over 30 years; he carefully balances the sound of each track, and the sound level amongst all the tracks, and the volume in relationship to all the other tracks you will hear on streaming, download or radio. It is a final blessing on the project.

Healing Visualisations Instrumentals were created,edited, mixed and mastered individually. I have estimated my listening time to be over 2000 hours, but it could be more. The instrumental tracks are just as beautiful as the originals. And just as effective. Everyone who has worked on this project has had to figure out how to stay awake while working on it, that is how compelling the music is in its invitation to relaxation. I am happy to share these tracks with you and hope you find as much peace listening to them as I did creating them.