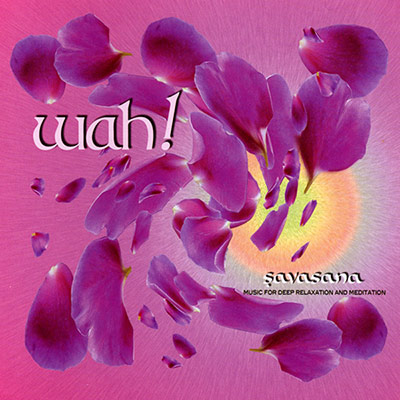 This collection of chants is designed for deep relaxation. In yoga class, the posture for deep relaxation is “savasana” – the practice consists of dissolving the body and mind into a space of deep spiritual peace. This CD features sharmonium, tamboura, violin, flute, bass, and free-flowing vocals.

The Story Behind Savasana

Savasana (pronounced shav-AH-sah-na) is a technique of relaxing the body, mind and spirit. It is a yogic practice which is as specific as all the other postures (or asanas) practiced during yoga class. In its simplest form, Savasana is a cool-out time at the end of a hard work-out, a time to let the muscles relax, and allow the mind to rest peacefully. In its most complex form, Savasana is an out-of-body experience…

The original tracks were recorded in August 2000. I had taken a month off from touring, and was badly in need of rest and healing. I had become more involved in Anusara Yoga and Ashtanga Yoga practices, and had expanded my own routines to include these. I began practicing at various yoga centers and some people who knew me started asking me to play music during the Savasana time.

Savasana (pronounced shav-AH-sah-na) is a technique of relaxing the body, mind and spirit. It is a yogic practice which is as specific as all the other postures (or asanas) practiced during yoga class. It is a systematic relaxation of body tissue, brain, bones, organs, and cells. In its simplest form, Savasana is a cool-out time at the end of a hard work-out, a time to let the muscles relax, and allow the mind to rest peacefully. In its most complex form, Savasana is an out-of-body experience.

As I was taught Savasana, the body is covered by a blanket and then willfully immobilized. No part of the body is permitted to move, with the exception of automatic breathing motion. Starting with the feet, the student systematically commands the parts of the body to relax. “Relax the toes, relax the feet, relax the ankles,” and so on. As the body parts are named, the body naturally responds to the command by relaxing and dissolving not only tensions, but their very presence. In India, the attendant is often left sitting next to a blanket with nothing underneath it! The attendant is paramount, because it watches over the identity to which the yogi will return. It is never touched or altered, until the body is re-entered.

When I played music for Savasana at the end of yoga class, I received strong reactions. Because Savasana was taught to me as a time of deep healing, a time of dissolving ego, scars, and worldly attachments, I went to a deep place as I sang. To me, it was not a song. It was a process of deepening into awareness. I was dissolving into an evaporated state of being as I sang.

When I entered the studio to record these songs, I honestly didn’t know how to approach it. I couldn’t just come up with a few tunes and record them. It seemed trite and pointless. I had to honor the process. So, I decided to enter the studio and practice “dissolving” on tape. There were no songs, no melodies. I had only a few deities written on a piece of paper. As the engineer rolled tape, I attempted to pray and dissolve for a projected time of 7 minutes.

As the recording process unfolded, I brought in each of my band members and allowed them to hear about 1 minute of the song to determine the key and the mood, and then I recorded them. If indeed the practice of leaving the body in Savasana was like dying (as the literal translation of the word implied), then it was something you could never prepare for. Recording in this way helped us uncover the energy that came with surrender, with giving up, with praying at the last moment. There were no second chances.

It took a full year of work to get the CD into the marketplace. John Bashew (Omega Institute’s Sound & AV Director) spent many long hours trying to wade through the effects that I had printed to tape, as well as all the pops, blips, and static that were inadvertently recorded in the studio.

Seva had a different problem. He had to calculate how much caffeine he needed to injest to work on each song. The music was so effective, he found he was “spacing out” as he listened to the tracks. In the end, I think he settled on a tiple latte to keep him “present”.

I was honored to do this project. And I was surprised and grateful that the energy could be caught on tape and extended to others. If there is deeper healing that comes through these songs, it is only because I was graced with the ability to hold it, if only for a moment.